Sandvine also reports where most pirate IPTV servers are located. Surprisingly, the United States comes out on top with the most servers. However, looking at the actual bandwidth that’s transferred the US is in third place, behind Canada and the Czech Republic. – Ernesto, TorrentFreak » https://ift.tt/2ThwMyg

In the Americas, Netflix’s share of downstream traffic for the first six months of 2019 was 12.9% — dropping from last year’s 19.1% share — putting it in third place behind HTTP media streaming and operator-delivered video. That reflects the growing consumption of other streaming options, both paid and free, with the biggest growth coming from operators’ own internet-delivered TV and video services (which accounted for 15% of downstream traffic in the region), per Sandvine. – Todd Spangler, Variety » https://trib.al/Cp8bMqq 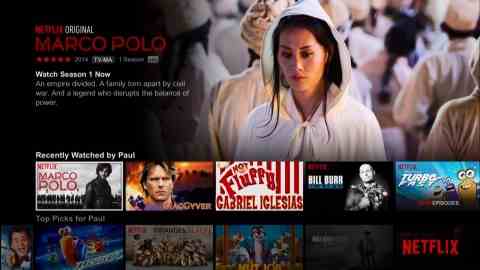 Highlights of the [Sandvine Global Internet Phenomena Report] include: Netflix is making gains in the new European markets they entered late last year, with the service now accounting for almost 10% of peak downstream traffic in Austria and France. […] YouTube is the top mobile application in both Europe and Asia-Pacific, making it the global leader in mobile traffic. – Robert Briel, Broadband TV News
(Full Story:http://ift.tt/1NOEhWw)

A recent report from Sandvine indicates that Internet traffic from Netflix is surging. During peak Internet hours in North America, Netflix is responsible for 36.5% of all Internet traffic. And in step with Netflix’s rise in popularity, we’re seeing a corresponding decline in traffic from BitTorrent. – Yoni Heisler, BGR
(Full Story:http://ift.tt/1RvFt03)

Posted on November 20, 2014 by Streaming-TV Leave a comment
Netflix’s video-streaming service continues to be the most bandwidth-hungry application on the Internet, now accounting for a whopping 34.9% of all downstream traffic during peak periods on North American broadband networks, according to a new study. […] Amazon.com’s Instant Video represented 2.6% of peak downstream traffic in North America this fall. While that’s still far less than Netflix, Amazon’s video service has more than doubled its share of bandwidth consumption in the past 18 months, […] Hulu’s share of primetime downstream traffic stood at 1.4%, down slightly from 1.7% in the first half of 2014. […] The study found BitTorrent Inc. file-sharing traffic continues to drop as an overall percentage of bandwidth consumption, representing 2.8% of peak-period downstream traffic in North America. Over all, BitTorrent accounts for 5% of bandwidth usage in the region — down from 31% in 2008. In the Asia-Pacific region, however, BitTorrent still represents more than 33% of total traffic, according to Sandvine. Todd Spangler,Variety via Boston Herald
(Full Story: http://ift.tt/1uY3sM2 )